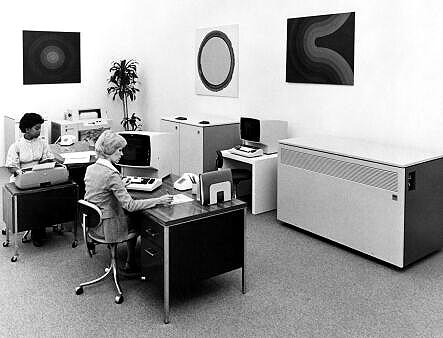 The IBM 4331 processor (the long box the size of a small kitchen counter) had 512K of memory. The twin IBM 3310 disk units in the corner each had about 64M of storage. The IBM 3277 terminals displayed green text on a black screen.

Ask any lifelong computer person and they will probably have a story or two to tell about the computers they have seen through the years and how things have changed. I am no exception. Hang around any industry long enough and you will see tools evolve. I thought it might be fun to take a look back and start a conversation about the computers that introduced us to our careers and shaped our lives.

Early in my freshman year at Pomona College in 1979, I was bored one night (meaning I really didn’t want to study) and hopped up on this substance called caffeine, which my body wasn’t used to, and started exploring Oldenborg, the dorm I lived in that year. I entered a room that was usually locked, that had two computer terminals in it. My discovery of that room was a defining moment in my life and probably set me on the path that led me to where I am today.

Over the next few days, I asked around and learned that one was connected to an IBM 4331 and the other to a DEC 10. I didn’t know what either of those was, but I began tinkering and asking more questions, learning more about how they operated and what I could do with them. I found out that there were text-based games available on the DEC 10 and spent the next few weeks playing tic-tac-toe, hangman, and typing in burn rates to land an imaginary lunar module without crashing it. Somewhere along the way, one of the guys living in the dorm taught me the rudiments of BASIC and that gave me a clue how computer programs were put together.

Then I discovered a game called Adventure (aka the Colossal Cave Adventure) on the IBM machine and that was the beginning of a long obsession that probably started my career. In short, I didn’t have the patience to imagine my way out of the “maze of twisty little passages” by typing commands to go in different directions, so I decided to see if I could cheat by figuring out how the game was made. My newly acquired, scant knowledge of BASIC gave me a confidence I didn’t deserve. 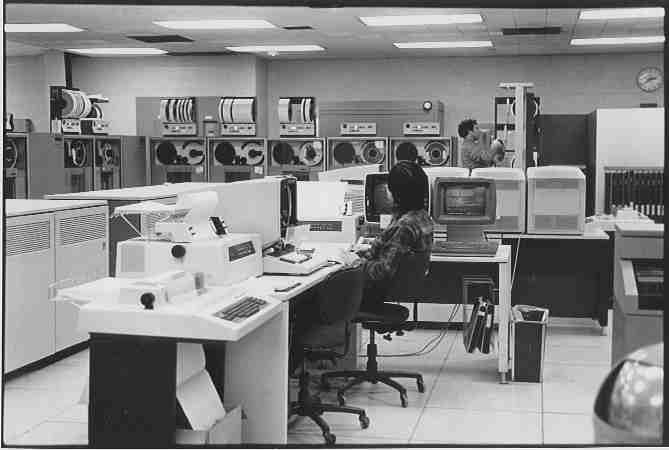 I spent my college and early career years in and out of machine rooms like this one. (Photo: Bob Resnikoff) 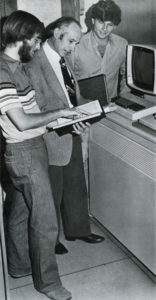 A leader in the use of computers from the start, Pomona became the first educational institution in the world to own and operate the new IBM 4331 computer.

One day, after a class in the Millikan Laboratory, I got curious about the machine noises coming from a very large room on the second floor. I found out this was where the IBM 4331 actually lived, and that it was operated by the Seaver Computer Center. I was amazed that the lone terminal in my dorm was connected to this mesmerizing array of large cabinets with their whirring noises and blinking lights.

In the following weeks, I somehow wrangled myself a part-time job at the Computer Center, doing data entry, teaching other students how to log on at the terminals and other menial tasks. At some point, they swapped out all the equipment for a newer IBM 4341 system, which enabled me to learn about the cables underneath the raised flooring and what the various machines actually did, which in turn taught me something about how computers actually worked.

All the while, I was playing Adventure every chance I got, trying to figure out how to beat the game by learning about how it was put together, often to the detriment of my actual school work. (Needless to say, I wasn’t an A-student.) My addiction to the game and the knowledge I was gaining from the people around me in that machine room led to my learning IBM Assembly Language, the CMS EXEC language, Fortran, Pascal, and APL. The more I learned, the more I obsessed I became about computers. I discovered text editors and began typing my notes into the computer, and eventually gained enough programming skills to use APL to solve my math homework and write a crude word processing program to format and print my term papers.

My thesis ended up revolving around a set of out-of-order punched cards sitting idle in a professor’s office, containing data about an anthropological study he led. (Yes, anthro major here. That’s a whole other story.) I learned about sorting algorithms so I could put the punched cards in order after reading them into the system and wrote programs to help me finish the project. 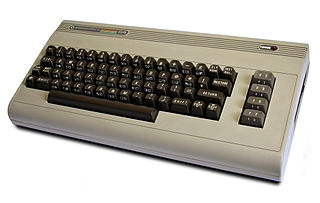 During my senior year, my dad brought home a Commodore 64. It was basically a keyboard with ports that connected to a TV and other peripherals, including a cassette drive. My dad thought it was pretty amazing, but he wasn’t a computer guy like I was. To me, it was nothing short of revolutionary. I had been hanging around a big mainframe computer for the last three years and had no idea there was a whole other world out there innovating systems the size of a keyboard, that encompassed all the major systems in the big machine room I had been spending so much time in. And there was color, and sounds, and games that weren’t just text. I spent hours honing my BASIC programming skills on that machine and learning a ton about the workings of the chips inside it. 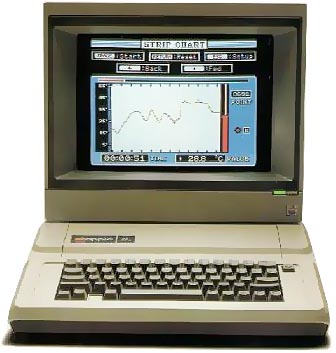 Apple IIe with a color display

I was aware of the inventions of Steve Wozniak and Steve Jobs, but at the time, I was preoccupied with trying to exit from a highly respected and very demanding liberal arts college with the appropriate paperwork and didn’t pay much attention. When I did manage to graduate by the skin of my teeth in 1983, my dad gifted me an Apple IIe. I had no idea the kind of power he had put into my hands at the time, but that machine lasted me until the early 1990s and taught me more about computers than I ever could have imagined.

I was lucky enough to be offered a job at Syncsort in New Jersey shortly after graduation, where I continued to work with IBM mainframe systems. On weekends and in my spare time, I tinkered with my Apple. I found a computer store that sold parts and accessories for my machine and upgraded it with a color monitor, more RAM, and a hard drive, which I thought was amazing. I had been working with washing-machine-sized hard drives in college and at work, of course, but the norm in personal computers was floppy drives or cassettes. Having a hard drive small enough to fit inside my Apple machine was just amazing to me.

I started balancing my checkbook using an early version of Quicken on that machine, and I was delighted that an industry had emerged that made personal computer software that was actually useful. My personal computer transitioned from the status of “toy” to “tool.”

The Mac-vs-PC wars were in full swing by the time I took a job at Amdahl in Sunnyvale, California in 1989, but I largely ignored them because I was still working with mainframes, and I was still perfectly happy with my highly customized and functional Apple IIe at home. In an unexpected turn of events, I was transferred to an IT department where they were deploying SPARCstations from Sun Microsystems. Amdahl was a mainframe company, IBM’s largest competitor back in the day, and the engineers needed a way to simulate several virtual mainframe systems in separate windows. Thus my introduction to the world of Unix, and along with it, the Internet.

My first Microsoft Windows computer was a 486 tower I built myself in the early 90s. By this time, getting into the guts of computers, installing chips, replacing hard drives, etc. was second nature to me, and all in a days work, so building a PC seemed like the natural thing to do. Why buy when you can build, right? Well, that was my thinking at the time anyway. I was a geek who couldn’t resist the opportunity or the challenge.

Around this time, I also became fascinated with Linux, which had a painful installation process that involved being downloaded onto a stack of unreliable floppies, but having acquired Unix at work, the prospect of being able to run a similar system on my PC was irresistible. 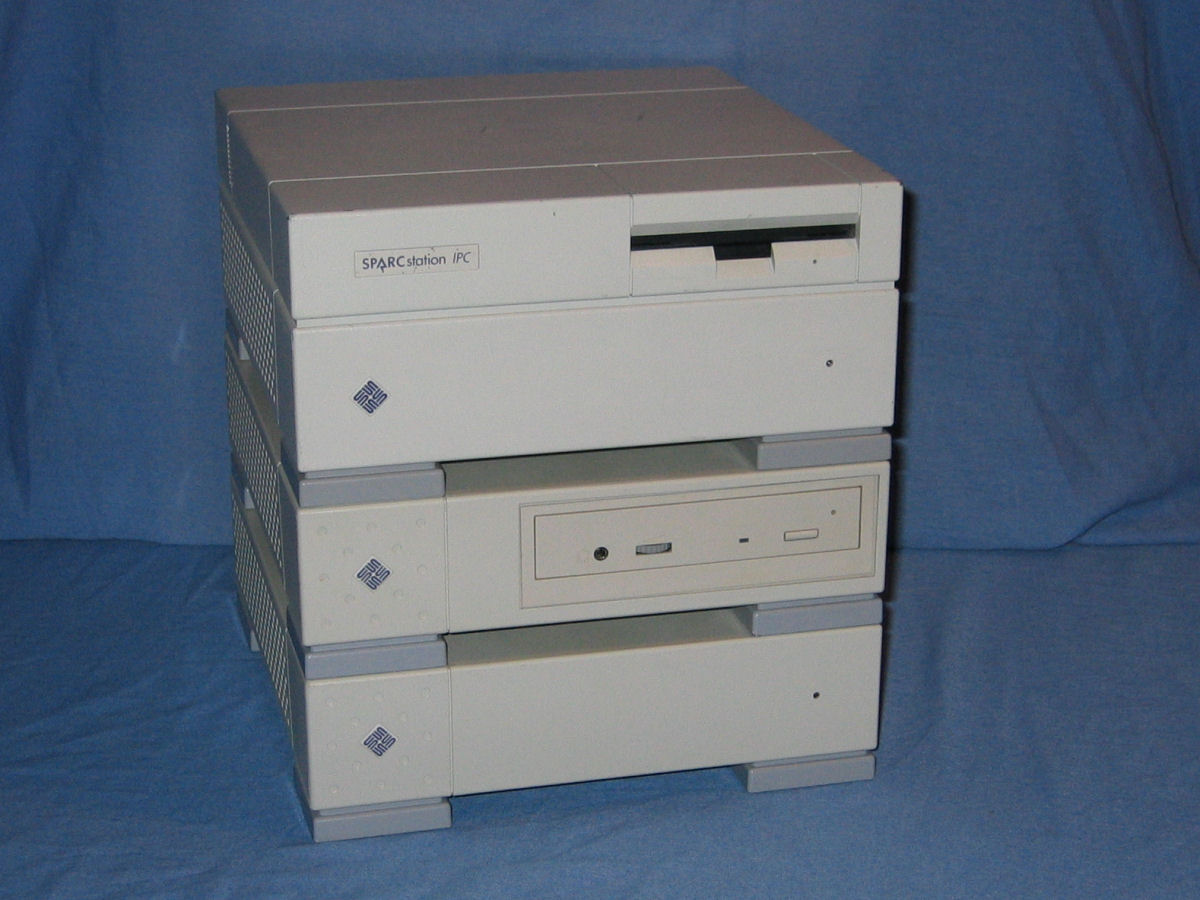 When I joined Netscape in 1997, I had to be ambidextrous. The browser behaved differently in Unix vs. Windows vs. MacOS, and I had to switch back and forth constantly. I became largely system agnostic, using whatever system was needed or was available to me to get the job done, but I gravitated toward PCs because Windows laptops became the norm for me as I began traveling a lot for my job. Plus, I was still building PC tower computers for myself at home and it seemed easier to have my laptop and desktop computers run the same operating system.

With the advent of the cloud and applications like Dropbox, Google Drive, and the like, the desktop seemed less important, and my computing philosophy gradually became one where I treated my computers like disposable devices — the idea being that if my computer fell into the ocean, I could just go to Costco, buy something off the shelf, download apps, login to accounts, and keep going like nothing happened.

Around 2011, I had a need to work in Unix more and decided to move to the MacBook family for my primary computer. Linux desktops were improving rapidly, but MacOS provided a less strained experience. By then, most of what I was doing was in the cloud, so the desktop mattered less than the convenience of the underlying operating system.

One thing I did notice after using my Mac for a while was that I no longer had any concerns about the operating system doing something weird out of the blue. I realized that as a systems guy, I was always ready for Windows to “betray” me at the most inconvenient moments and was always ready to pounce on a problem whenever it manifested itself. The current version of Windows 10 is less troublesome that way, but I still have that instinctual concern in the back of my mind whenever I’m on a PC. On my Mac, I focus on getting my actual work done and don’t worry about the system doing something crazy.

Now, in my present-day life, the majority of my computing happens in a browser or some web-based application, and my iPhone and iPad have become almost as important to me as my laptop or desktop. I still need a conventional computer, if nothing else because the desktop versions of various products still afford more flexibility, plus I like having several large displays in front of me. I do most of my computing in the cloud, so it’s more about my productivity and the workflow than the device itself.

What’s your computing history? I’d love to hear your story in the comments.